Since 1973, when abortion was legalized in the United States of America, so many people have prayed and worked so hard to end the scourge of abortion.

Individual Masses for Life, Rosaries for Life, sidewalk counseling, prayer vigils, Novenas to Saints, rallies and Marches for Life; investigations, legal action, research on the adverse effects of abortion; the continuing development of 3000+ pregnancy centers, and, more recently, the outfitting of scores of mobile pregnancy/ultrasound vehicles; national, state, and local chapters of pro-life groups working in many, many ways to change hearts and minds, and eventually stop abortion.

Abortion shops continue to close, at a faster pace since 2010; yet, abortion continues.

HOW LONG must it continue?

WHEN will it end?

Several years ago, a pro-life volunteer was trying to make a phone call. Somehow, the phone connected to a different number, answered by a woman who identified herself as a religious sister. A conversation ensued, and the sister told the volunteer that God had given her understanding of the means to end abortion.

The sister proceeded to describe the understanding she had received:

This website will focus on the first, and second, means to end abortion.

Below is a brief description of all of these means, given to us by our Eucharistic Lord and Savior Jesus Christ.

1) NOVENA OF MASSES
The infinite spiritual power of every Mass is truly beyond our human intellect.

The diocesan-wide Mass Novena effort has tremendous power, which comes from the humble obedience of the Priests and parish members in SPIRITUAL SOLIDARITY with THEIR BISHOP.

Each Novena of Masses is offered for one specific abortion business in the diocese (or in a nearby diocese) to PERMANENTLY CLOSE, and for the CONVERSION of the abortion workers/abortionists.

Click HERE to learn a simple and effective way to conduct a Novena of Masses.

2) EUCHARISTIC PROCESSION
Eucharistic Processions are fairly common events in Eucharistic Congresses, and for Corpus Christi and other special liturgies.

Eucharistic Processions at abortion sites are being introduced around the nation on a more frequent basis.

For example, Archbishop Aquila had a Eucharistic Procession with the Monstrance, during Lent of 2016, which circled the abortion site SEVEN TIMES. This is to commemorate the JERICHO MARCH, which God told Joshua to carry out in order to take control of the well-fortified city of Jericho.

On March 5, the march at Jericho by Joshua and the Israelite army is to be evoked as Archbishop Samuel J. Aquila leads a Eucharistic procession around Planned Parenthood in Stapleton and circles the facility seven times.

Archbishop Aquila intends for the march to be a peaceful, merciful and prayerful protest against the actions of Planned Parenthood. There will be no arguing or shouting, only prayerful witness to the love and mercy of God.

In order to understand why Archbishop Aquila is leading this procession as he is, it helps to be familiar with the story of Jericho as laid out in the Book of Joshua.

Joshua became the leader of the Israelites after Moses died, and led the pilgrimage to the Promised Land. Jericho was a city that resided in the eastern part of the Promised Land, but God decreed it was not to be a part of his territory, for the city had become one rife of pagans and the worship of false gods.

Jericho was a heavily fortified city with six-inch thick walls that were 26 feet high, perched atop a 46-foot embankment. The destruction of it seemed highly unlikely, but God, as He usually does, had bigger plans.

He commanded Joshua and the Israelites to march around the walls of Jericho once per day for six days, carrying the Ark of the Covenant with them. The Lord was careful to instruct them, “You shall not shout nor let your voice be heard nor let a word proceed out of your mouth, until the day I tell you, ‘Shout!’” (Joshua 6:10). The only sound they were to make was from trumpets of rams’ horns [that] those in the rear of the party would sound as they marched.

Then, on the seventh day, they were to march around the walls seven times, and on the last time around, God commanded them to shout at the top of their lungs, signaling that Jericho now belonged to God and His people. The walls of Jericho crumbled beneath it, and Joshua and his army sacked the city.

[The entire story of the JERICHO MARCH, the Biblical silent march by the Israelites around the strongly fortified city of Jericho, can be found in the Book of Joshua, Chapter 5: 13-15 through Chapter 6: 20-27.]

Derek Barr, first-year instructor for the Denver Catholic Biblical School, notes that despite the evocation of Jericho in the procession, Archbishop Aquila is leading the charge into a different kind of battle than that of Joshua.

“Our battle today is laid out for us by the Apostle Paul in Ephesians 6:12,” Barr said. “He tells us that we are not to fight against flesh and blood, but our battle is a spiritual battle against demons, those who bring death, injury and deception to humans via spiritual means.

“[Archbishop Aquila] is doing for our Captain Jesus as the Levitical High Priest did for his Captain Joshua in leading us in a prayerful action that will bring down the spiritual walls of the sin of abortion which is bringing death, injury and suffering to millions of women, men, girls and boys,” he said. “Jericho was the first of many battles that led to the Children of Israel possessing the Promised Land, and this is one of many battles that will lead to the defeat of the spiritual forces behind abortion.”

For more information and to RSVP for the March 5 Eucharistic Procession around Planned Parenthood, visit www.archden.org/march5 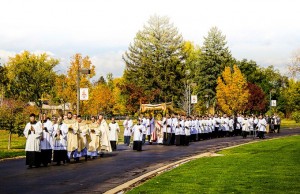 “We were honestly expecting 500-800 people,” said Karna Swanson, communications director for the archdiocese. “Three times that number showed up.”

“It was truly a moment of grace, a moment of blessing, a moment of praying to our Lord that hearts may be changed,” Archbishop Aquila told Catholic News Agency. “It was wonderful to see how many turned out today.”

The archbishop led the gathering of 1,800 Catholics seven times around the abortion giant’s Stapleton, CO location.

Families with young children were abundant in the crowd, as were archdiocesan clergy and seminarians from both of Denver’s seminaries, St. John Vianney Theological Seminary and Redemptoris Mater Archdiocesan Missionary Seminary.

Religious sisters were also part of the procession, including the Nashville Dominicans, the Sisters of Life, and the Missionary Sisters of St. Charles Borromeo.

When Archbishop Aquila announced plans for the procession last month, Swanson said, the response was positive and full of gratitude.

“We set up a simple website with a no-nonsense invitation for people to come and pray with the archbishop, and immediately we were hearing from people just thanking the archbishop for doing this,” she said.

Efforts were made by the archdiocese to ensure that reverence was maintained at the Eucharistic procession, with the archdiocese’s liturgy office handling transference of the Eucharist to the site and providing prayer books for attendees, along with emphasis placed on prayerfulness and silence both in advance and on the day of the event… To read entire article and see photos, visit:
https://www.lifesitenews.com/news/eucharistic-procession-around-planned-parenthood-draws-3-times-expected-num

This is powerful Spiritual Warfare, which can be conducted by Bishops with Priests, or by Priests.

3) FASTING & PRAYER FOR THE HOLY PRIESTHOOD
At first glance, this does not appear to be a pro-life activity, until we realize that the Priesthood brings us the Sacraments, and most vitally, the Holy Mass and the Eucharist — our path to ETERNAL LIFE!! Without the Holy Priesthood, we have no INFINITE means to overcome evil and death, no INFINITE means to attain Salvation.

Thus, it is vitally important to continually pray for our Priests, and to encourage Holy Priests and Holy Bishops. To have our Bishops pray & fast each month, for 9 months, for the Priesthood, is a powerful call to Holiness, which can only increase the holiness of the flocks they shepherd!

As the ‘ripple effect’ of Holiness spreads out more and more, God’s Grace will be able to reach more and more people, and as Holiness increases, evil, death, abortion, and euthanasia will decrease.

These prayers should only be prayed/led by Priests.

In Rockford, Illinois, four Priests would go to the four corners of the huge abortion facility (a former school that takes up the entire block), and at the same time, stand at the sidewalk corners, quietly praying the prayers of deliverance over the building. The administrators of the abortion site could not remain in the building at these times. Within a matter of a few months, this long-standing abortion center was closed, for good!

Watch below a 5-minute video, from 15 July 2011, of this type of Spiritual Warfare — (http://www.youtube.com/watch?v=NeeVOLHGAJ8)

Exactly six months after this video, this huge abortion business was PERMANENTLY CLOSED!

DENVER, CO, April 23, 2012 (LifeSiteNews.com) – Prayerbooks, rosaries, and pro-life pamphlets are a common sight outside Planned Parenthood’s massive facility in downtown Denver, but this year, local organizers of this spring’s 40 Days for Life campaign decided that one last piece was missing to bring the light of Christ to the country’s second largest abortion facility: the Holy Sacrifice of the Mass.

The idea to celebrate the Catholic Mass in front of Planned Parenthood came from Fr. Joseph Hearty, Assistant Pastor at Our Lady of Mount Carmel in nearby Littleton, who felt that it was time to “pull out the big guns.” It was, he told LifeSiteNews, an inspiration from the Holy Spirit.

“If we can pray the rosary, why not offer the Mass, why not use the Mass and the Eucharist as a means of fighting this tragedy,” he said. “Why not use the most powerful means that we have?”

As it turned out, the idea energized the local pro-life community far beyond what organizers had expected. Fr. Hearty planned for thirty attendees at his first Mass on March 3rd, and got a hundred.

Providentially, an empty parking lot right across the street from the Planned Parenthood owned by a pro-life couple was big enough to accommodate the crowd.

As a member of the traditional Priestly Fraternity of St. Peter, Fr. Hearty celebrated the traditional Latin Mass, known as the Tridentine Mass. Diocesan priests have also gotten in on the action, though, with six different Masses offered in the parking lot during the 40 DFL campaign in English and Spanish. All six Masses were well attended, averaging between fifty and a hundred persons.

A March 31st 40 DFL closing rally kicked off with a Spanish Mass, followed by a rosary led by Bishop James Conley, apostolic administrator for the Denver Archdiocese. In comments at the rally, Bishop Conley urged pro-lifers to vigilance as Planned Parenthood continues to build “megaplex death mills” across the country, the Denver Catholic Register reports.

According to the Register, over 300 people attended the rally, which ended with a second Latin Mass celebrated by Fr. Hearty. There were so many at the final Mass that the Priest returned to the altar four times to break up the hosts for distribution before finally running out.

The popularity of the idea, says Fr. Hearty, is a sign that “people really want to do something.” He hopes the idea will spread, and in particular that clergy in other parts of the country will be inspired to become more involved in pro-life work.

As for the effort in Denver, organizers are hoping to build on the momentum and establish a regular schedule of Masses in front of the abortion site, continuing to wage spiritual warfare against the nation’s largest abortion provider.