Since that time, several Novenas of Masses have been conducted on the diocesan and archdiocesan levels in Kansas. Politically, Kansas has been in a political gridlock for many years. This appears to be changing, and we hope for more abortion closures in the near future.

A statewide Novena of Masses (157 Masses total) was offered Sept. 7 – Sept.15, 2012, and may have closed an abortion site in Kansas City, and also halted the abortion business scheduled to re-open in Wichita.

Julie Burkhardt, a Tiller employee, tried to reopen an abortion business on the east side of Wichita and actually had a facility; it was set to open.  At the end of the Novena, the landlord of the place became distressed when he saw protests, and the lease got yanked, resulting in the failure to open. That doctor, who had a troubled past, then got investigated for license violations, and did not pursue it.

In 2014, there were two Novenas of Masses, because the Wichita abortion site had reopened.  This was the Southwind Women’s Center, Tillers old place.  It opened in 2013. Notice this article of how they “celebrated” the killing of 1200 babies in one year (below).

This was from an article: 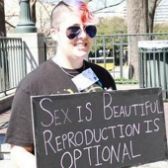 Congratulations South Wind Women’s Center, you succeeded in killing more than three people every day for an entire year. Be proud. View on townhall.com

In July of 2014, a Kansas City abortion business closed:  http://www.kansascity.com/news/local/article816753.html

Another article citing the abortion site closures, in Aug. 2014:

The fruit of the 4-15 December 2104 Novena of Masses was that the abortion providers were barred from doing abortions for a time until they could get the abortion facility license reinstated. They brought in another abortionist, to resume the killing.

…On the day after the novena, the abortion mill owner did NOT get her license reinstated to continue to kill.  She fully expected the KsBOHA to pander to her as it did for many years under Sebelius’s rule, but it didn’t.  Not many people know about this but we consider this a great victory.

Thus, after these six Novenas beginning in 2009, 5 abortion sites are gone.

A total of 3 abortion sites remain in Kansas: two in Kansas City and one in Wichita.

So, Kansas has gone from 8 abortion sites, to 3.

A Novena of Masses was offered (during a 40 DFL campaign) in the Pensacola diocese, in 2009, for one specific abortion business, and it closed shortly after the completion of the Novena of Masses.

There were 4 abortion businesses within this diocesan area in 2010.

One abortion business has permanently closed, and the other 3 have been closed for extended periods.

At the conclusion of a diocesan-wide Novena of Masses in October 2011, New Woman All Women abortion site in Birmingham was exposed for 3 botched abortions on 21 January 2012. In March 2012, ADPH [Alabama Dept. of Public Health] released a 76-page deficiency report, and on 6 April, revoked this license. Much more occurred; but finally, in early 2014 after another Novena, New Woman All Women permanently CLOSED. The building, an abortion site since the 1970s, was demolished in January 2016.

In summary, since the Novenas of Masses began in 2010 in the Birmingham diocese:

-Planned Parenthood Birmingham, and AWCRA in Huntsville, were both closed by the state health department in 2014, for 8 months and 3.5 months, respectively

-And a long-standing illegal abortion site in Selma was closed by the state in December 2015.

In summary in Georgia, in 2015, three Novenas were offered on the local level, one each for three abortion businesses.  All three have closed, and a fourth site in Augusta also has closed (2016).

3 NOVENAS OF MASSES were offered in Lent 2015 — for ‘Fem’, Roswell, Powers Rd Marietta
1) Powers Road, Marietta — Closed after 3 months, in June 2015
2) Feminist is still open
3) Roswell – Closed in August 2015; it reopened with new owner.
[in November 2015, Roswell Closed again – verified in February 2016]
[the original abortionist was a fallen away Catholic — they reached out in 2014 to him — in Lent 2015, a Mass was offered every day of Lent for this abortionist… in August 2015, a pastor met the abortionist unexpectedly, at the GoodWill store … the abortionist said he did not hold it against pro-lifers, & that there had been a time when “I never would have done abortions”… abortionist later died… there had been 80 Masses offered for him over the 2 years]
4) Villa Rica Way, Marietta — opened in July / Novena of Masses offered in September 2015.            In February 2016, the Villa Rica Way, Marietta, abortion site CLOSED.

In Summer 2016, a Novena of Masses was offered but not publicly announced.

Two more Novenas of Masses were offered:
1) During Fall 2016 / 40 DFL for PP Marietta
2) During January 2017 for Carafem (this was the second Novena for Carafem, the first had been offered in 2016)

AND AS A BONUS FROM GOD, the Augusta abortion site CLOSED in February 2016
Thus, 4 ABORTION SITES CLOSED IN GEORGIA FROM JUNE 2015 to FEBRUARY 2016

Such closures are unprecedented, and the INFINITE POWER of the NOVENA OF MASSES — enveloping all the years of prayer & action since 1973 — seems the only reasonable explanation.

It is as if God gathers ALL the 40+ years of prayers, individual Masses, Rosaries, vigils, marches, rallies, sidewalk advocacy, pregnancy center advocacy, legislative efforts, and ALL the heartfelt suffering and sacrifices of scores of thousands of concerned People of Life into His Hands, adds them to the Infinite Novena of Masses, and closes these places of death.